A hilarious deep dive into the transitional period of your adolescent life. Sharply funny, deeply realistic, surprisingly moving, brilliantly told, and truly sex-positive at its heart. Sex Education season 4 will soon be the spotlight season we have all been waiting for. A raunchily brilliant Netflix Original, its alums like Otis, Maeve, and Eric (to name a few) have attracted a huge and loyal fanbase. Not to mention the plaudits for their beautiful representation of all those heavy concerns. It does not feel hectoring, rather, the lightness of touch does it all. 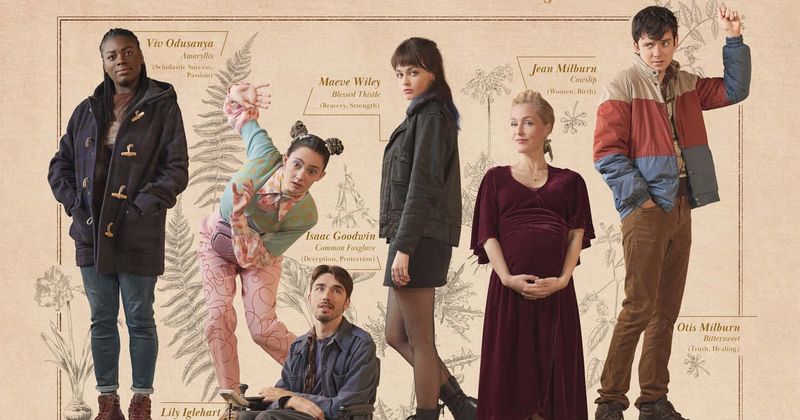 And most of the credits, if not all, go to its stellar cast. With each new season, the cast has just expanded in number. And interestingly, it never felt like too much. However, a few months earlier we had the sad news of the departure of its four beloved cast members that left fans shattered. We almost thought Sex Education will never be the same. Until yesterday. Netflix rolled out the first-look images of its fourth season, which is now under production. Adding to our delight, they have recruited the face of Schitt’s Creek among 7 other new cast members to make up for the loss.

Yes, you read it right! The Emmy-winning Canadian actor, writer, director, and producer has joined the cast of Netflix’s British sitcom. The 39-year-old actor and the Degrassi alum’s character will reportedly play author and tutor Thomas Molloy in the series. Per Netflix’s description, he will guide Maeve (Emma Mackey) on the show in an elite United States course at the prestigious Wallace University. Even in the images, he is seen sitting beside Maeve holding a paper and giving that staunch professor look. Here, feast your eyes on the Twitter post and dance with joy as you get to see your favorite characters back in action again.

Reportedly, Sex Education season 4 will explore Otis and Eric’s new adventures at the Cavendish Sixth Form College, which they thought was progressive but is the exact opposite. The college’s student-led, non-competitive ethos completely surprises Viv, while Jackson is still having trouble moving past Cal. By enrolling in an art A Level, Aimee attempts something new, while Adam questions whether traditional education is right for him.

ALSO READ: Sex Education Season 4 Might Be the Last Season With the Original Characters

Levy’s role in the series as Maeve’s tutor will mark his return to live-action TV since the conclusion of his sitcom, Schitt’s Creek. Are you excited for the upcoming season with all of its raunchy adventures? Do let us know in the comment section below. Meanwhile, stream all seasons of Sex Education on Netflix.