We all have some specific things which we cannot live without. Well, do you have a list of things that you cannot live without? Because the Stranger Things star kid Noah Schnapp definitely has one. He cannot think about living without even a single item on the list, which includes a special food item as well. Do you want to know more about it? Let’s find out here.

Noah Schnapp and his inseparable essentials!

Actors have to go from one place to another to shoot, and not every time they get everything they want. Therefore, these people keep some of their go-to things or preferable things with them. Minimum, these things would have to be there wherever they go and whatever they do. Here is the list of things Noah Schnapp cannot live without.

As we know, the music plays a very important part in the show; it does in Noah’s life as well. Whenever he gets some time off of shoot or he has to shoot a melancholic scene, he listens to the music to make him feel intensely. The friendship between Noah and Millie is one more reason to love the show. Noah actually learned the trick from Millie.

He also shares information about the set as well. He says that they play music all the time on set. When there are no audio or no lines, they just have to walk dramatically; the music makes it perfect. It helps them to get into the zone.

Surprisingly, Xbox is one thing that Noah cannot live without. He would bring this everywhere he goes. Last year when they were filming, they played Mario and other games. But his personal favorite is Fortnite. He is actually good at Call of Duty as well and he loves to play the games among other things.

It sounds weird, but this is also the thing. Whatever he eats, wherever he goes, Noah has to have the Tabasco sauce in it. The best thing about it is that it goes with anything.

As surprising as it sounds, Noah is clumsy when it comes to eating food. This pen has kept him out of many troublesome conversations with the wardrobe crew. He shares an incident when he was eating at a restaurant with his family. He finished food without spilling anything on the clothes and his family members were astonished. While they were praising Noah and saying, “you’re clean,” Noah got up only to find his back is full of chocolate sauce and the chair is also dirty because of the same.

Everyone, including the server, was surprised to see this. Recently, Noah has shot a film. The first thing his parents did when they started the film was to warn the makers about Noah’s habits. They warned the crew not to forget to put a robe around his neck while eating. Well, in this case, this thing seems to be very helpful and certainly very essential.

Of course! A blue and red Louis Vuitton wallet, which has ‘Have a Vuitton Day’ written on the back. He shows the random stuff he has in the wallet. A metro card, credit card, and Chipotle burrito card as well. He shares the story of how he got this Chipotle card, which provides free Chipotle wherever he goes. Noah loves food, as we have seen. In that light, this card is really a much-needed card ever.

You are not the only one here, Noah. Well, this is the most important thing in our lives too. Noah says he likes to capture everything on his phone. Even though he doesn’t have the latest one, he loves his phone as it helps him connect with his fans and friends. 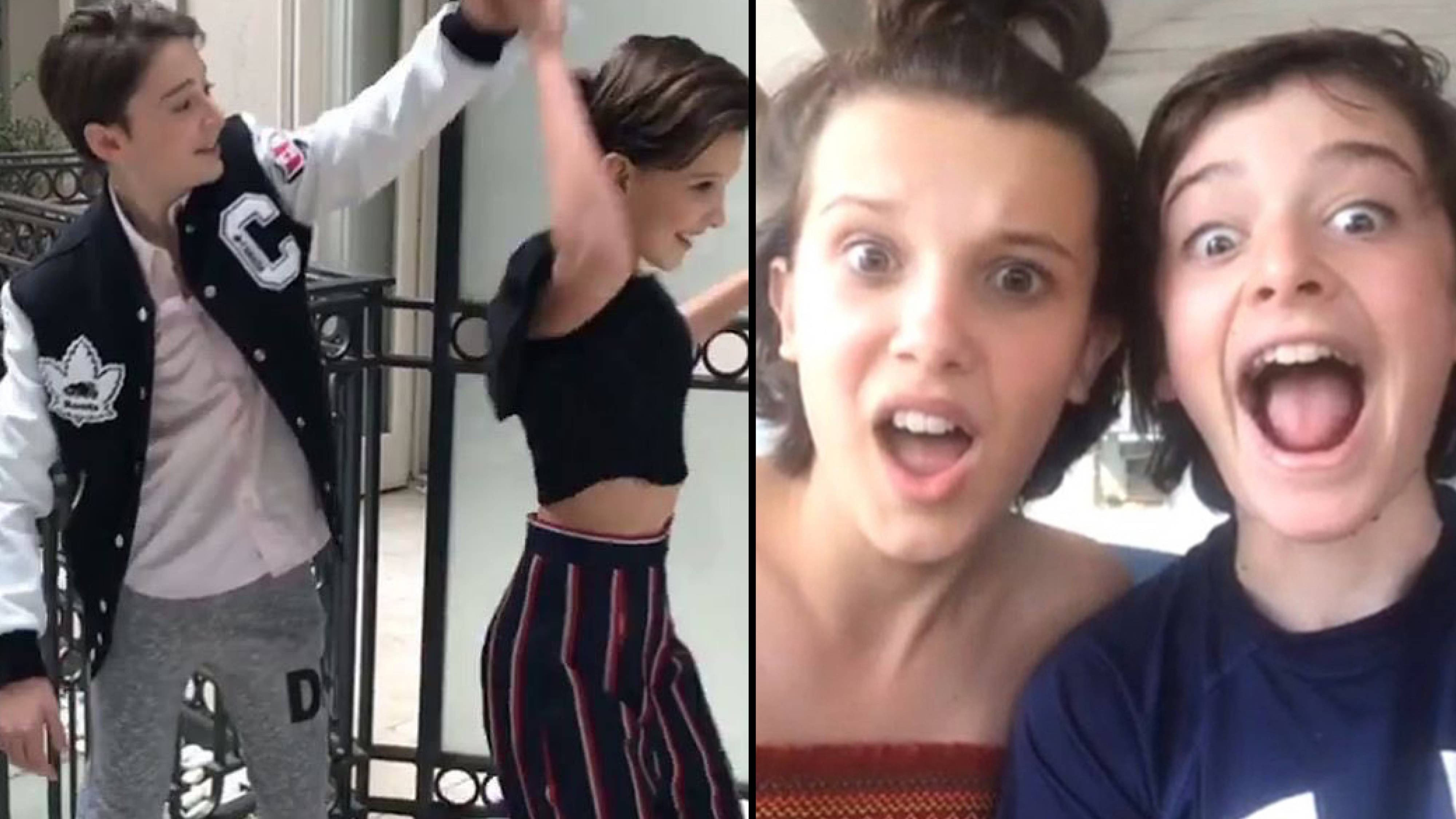 However, he says he drops his phone every time. There are no cracks on the screen, but the back of the phone is disgusting.

Another thing that we can connect to is this. He uses Blue de Chanel. He used to run to his father for cologne. Noah would always use his father’s, but his father said he should have his own fragrance. So, this was the first-ever cologne Noah has brought from Dubai airport.

Also Read: ‘Stranger Things’ Stars Millie Bobby Brown and Noah Schnapp Have a Marriage Pact but With One Condition and a Deal-Breaker

When he was younger, people would tell him he smelled horrible. But now that he has his fragrance, he says, he wishes a celebrity like Zendaya would come up to him and compliment his fragrance.

This is the special food item that we mentioned above. TBH is Noah’s own brand that produces Hazelnut Cocoa spread like Nutella. Noah says that he loves Nutella, but he wanted to make it healthier. He wanted to launch something. However, his love for food was the guiding force for him to launch the brand. It wants to save nature as well, along with human health.

As it is an inevitable part of an actor’s life to roam around the world. This transparent suitcase of Noah is another essential item. He says every time whenever he passes through the security; the guards look at him with questions in their eyes. As the bag is transparent, everyone can look at what is there in the bag.

He says people think it’s crazy to use a suitcase like this, but he loves his little baby.

Last but not least. He just got a 16-inch laptop, and it is hard for him to carry it with him. The laptop is also so much important to him, as he reads his scripts there, and he FaceTime his friends.

Well, these are the things that Noah finds essential for his daily life. Do you have anything that you just can’t spend the day without? Do share with us and ask your friends too.