In the Rick and Morty season 5 climax, Evil Morty discloses shocking information while outlining his strategy. He needs to make one final mental infiltration into Rick to obtain information for a portal machine in the hopes of escaping from something known as the Central Finite Curve. Additionally, it’s part of his plan to convince Morty that he’s not evil and that Rick is the true antagonist of the narrative. In light of this, let’s understand what the Curve is, and whether it will return in the anticipated Rick and Morty season 6.

What is the central finite curve?

Right from the time of Zeus, everyone has either preached power or wanted to be the most powerful person in all of the universes. And it seems like, Rick, at some point in his life, may have desired the same. In the season 5 finale, Evil Morty introduced or re-introduced the term “Central finite curve.” The term first appeared in “Close Rick-Counters of the Rick Kind,” when someone on the Council of Ricks says, “Of all the Ricks in the Central Finite Curve, you’re the malcontent!”

The central finite curve appears to Evil Morty as a curving helix made of bright golden orbs. It literally comprises a finite, upward-curving centre strand. However, we notice that this finite curve arcs through a far larger multiverse. Each golden orb symbolizes an entire reality where Rick is the smartest man in the universe. Evil Morty quips, “They built a wall around infinity and separated all the infinite universes from all the infinite universes where he’s the smartest man in the universe.”

ALSO READ: Will ‘Rick and Morty’ Be In Multiversus? How Can You Get the Characters?

To put it in simpler words: There are an unlimited number of worlds where Rick lives, and most of them (perhaps all of them) are isolated within a boundary that produces the Central Finite Curve. Now, if you are wondering if this narcissistic (or not) master scheme of Rick will have a comeback in season 6, here are our speculations.

Will the central finite curve appear in Rick and Morty season 6?

If you are a hardcore fan of Rick and Morty, you might know that the curve previously belonged to Evil Morty. And in the season 5 finale, he realizes that the system is broken and society really needs to burn. In essence, breaking the Central Finite Curve means ending Rick and Morty’s destructive symbiotic relationship. 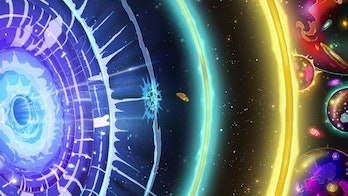 We saw Evil Morty blast himself into what’s essentially the multiverse using a device comprising Rick and Morty’s DNA. Now whether the curve will return to the sixth outing of this magnanimous sci-fi show will depend on the return of Evil Morty. He may have gone for the good or the producers may decide to make the animated show more complex than ever.

ALSO READ: From Mortcation to Piss, Here Is the List of Episode Names of ‘Rick and Morty’ Season 6

Have you binged on the existing 5 seasons yet? What are your speculations about it? Do you think Evil Morty will return along with the limited collection of the infinite universe? Do let us know in the comment section below.