The Stranger Things’ star, Maya Hawke shares a funny tweet to celebrate her dad, Ethan Hawke on Father’s Day. The actress has displayed her charms several times, but now we get to see that she has a good sense of humor too!

The 24-year-old quickly rose up the ranks of top upcoming actresses once she got her break on the Duffers’ show. She plays the bumbling Robin, who is best friends with Hawkins’s best hair dude, Steve Harrington. Although she entered the show at its peak, it didn’t take long for fans to warm up to her character.

A tweet from 2020 shows Ethan Hawke and Rihanna chatting at a basketball game. Initially, Ethan’s son was seated beside her, but Ethan switched seats to get close to the singer.

when Ethan Hawke made his son switch seats just so he could talk to Rihanna. pic.twitter.com/DoUZfQlFRx

This incident made quite the news back then. Recently, Maya brought it up again when she shared the tweet on her Instagram story on Father’s Day. 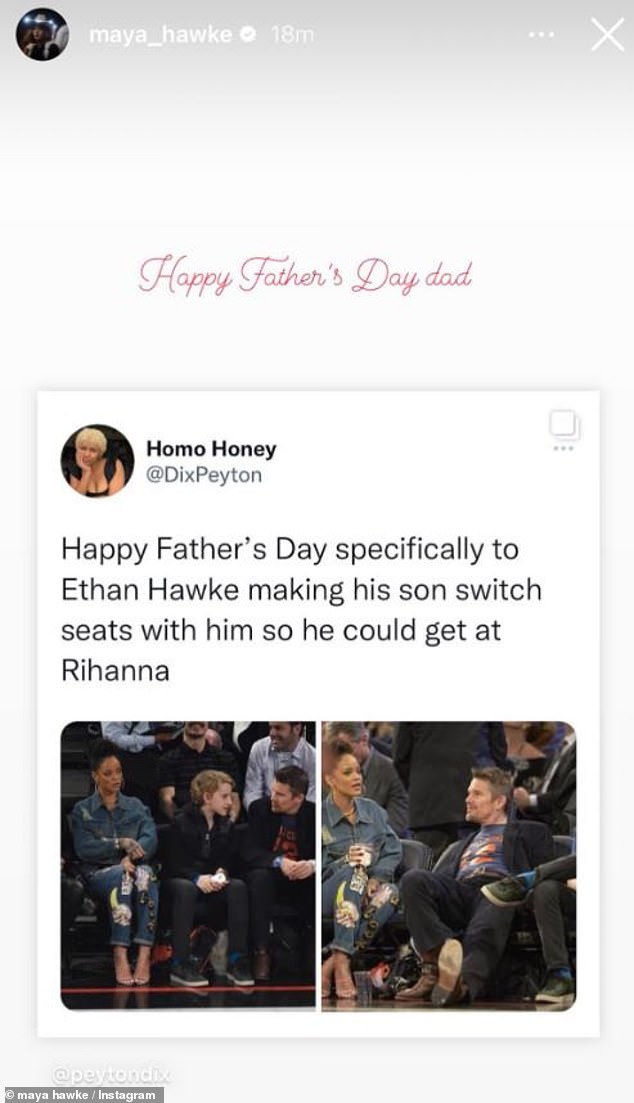 Moreover, the actor himself had shared the post on his Instagram previously with a hilarious caption calling it a “GREAT” night!

Well, now we know where the actress gets her humor from. Interestingly, the father-daughter duo appeared together in The Good Lord Bird. Apparently, the producers wanted to cast Maya in the role of Annie Brown and he couldn’t be more proud. We will see the duo together on our screens again in Revolver.

Maya Hawke is a fast talker and she admitted so herself. She revealed that when she gets nervous she tends to blabber a lot. The Duffers brothers saw it as a positive sign and instead wrote her page-long monologues. Season 4 of Stranger Things saw her character Robin bond with Nancy despite some hurdles initially. She follows Nancy’s lead to join in on the Vecna hunt and takes dangerous risks to save her friends and the town of Hawkins.

We will next see her in Wes Anderson’s Asteroid City and Bradley Cooper’s Maestro.

ALSO READ: Ethan Hawke Reveals How Stranger Things Saved Him From Coming Across as a “crazy, nepotistic dad”