After the beguiling ending of The Witcher season 2, we are all waiting for the third season to bring in some mind-blowing Witcherverse plot. By now, fans do know that a huge part of the storyline has a Time of Contempt arc. There will be some iconic and most anticipated scenes in this season from the books. For instance, the canonical fight between Geralt and Vilgefortz. Another interesting plot is that surrounding Ciri in The Witcher.

You must have surely heard about how the last descendent of the Cintran royal line finds herself lost in the Korath Desert. The good news is that we are getting all of it in the upcoming season, as they have already started shooting the scene in the hottest desert on Earth. Earlier we updated you about the wrap-up of the Wales shoot and with it the conclusion of half of season 3’s production. After Wales, the production team along with its warrior, Ciri aka Freya Allan traveled to Morocco to shoot in the Sahara desert.

Till now, Ciri, the one with the elven blood and the future of the witchers had to live in the shadow of Geralt, her protector. He kept her at a distance and she wasn’t allowed to practice her powers entirely, probably because she couldn’t control them yet. But The Witcher season 3 will be more about Ciri than any other character. Perhaps she is responsible to perish the old world, ushering in a new age. And she will come to this realization in the Korath desert per one of the iconic chapters of Time of Contempt. This is evident from the fact that they were restlessly filming scenes in the Moroccan desert, and only Freya Allan was present. 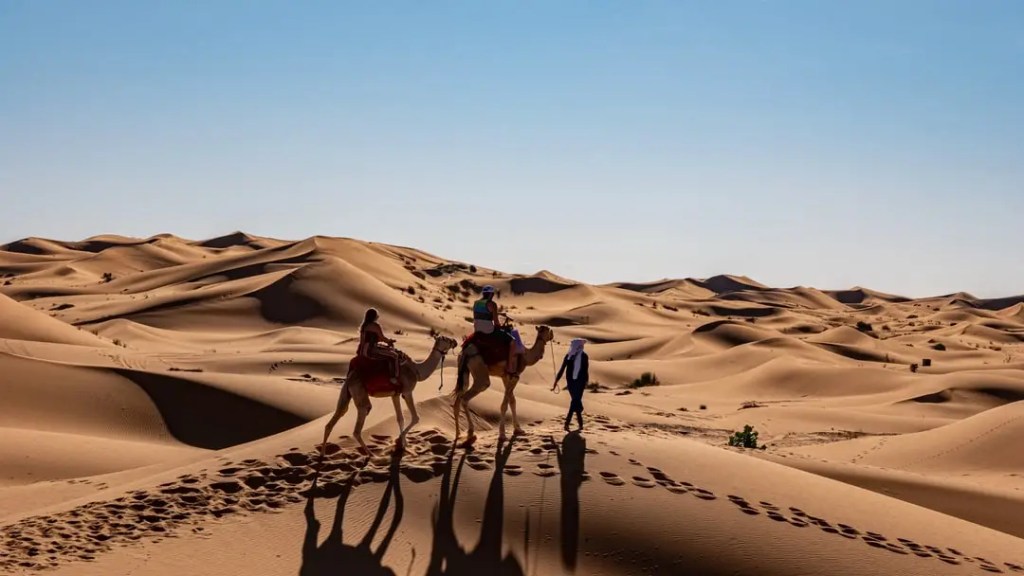 Apart from Allan, stunt persons were also present and filming continued even in the harshest of weather. What maneuvers were possible in the Korath Desert? They might have recorded Ciri’s encounter with the Trappers, a group that wanted to seize her and deliver her to the Emperor of Nilfgaard to collect her reward. Well, our Ciri is never alone. This time around, unicorns will be possibly there to help her find the way.

The Unicorns are coming to rescue Ciri in The Witcher

Ciri barely manages to stay alive in the Korath desert, well, thanks to the unicorn who comes to rescue her. The photographers of Redanian Intelligence captured the presence of two white horses at the location. Hence proved, the unicorns are coming! While one of them probably would be the unicorn Ihuarraquax, it is also possible both the horses play the same role. But they aren’t braided to look alike.

The horses were a major part of the recent filming, and as horses are typically not good fits for prosthetics, it is safe to assume that they will insert the horns in post-production CGI. Further, the shooting in Morocco is almost wrapped which means they are one step nearer to wrapping everything. Rumors also suggest that the next destination for The Witcher cast to land will be Costa Rica and the Maldives.

Are you excited about The Witcher season 3? What do you anticipate the most in the upcoming season? Do tell us in the comment section below.