Netflix’s The Witcher has indeed given fans a lot to cherish and be thankful about, and fans too, have so far loved everything about the fantasy drama. The trait about any great show is that it makes viewers speculate and ask questions about it. While we all were already aware of the existence of more witchers on The Continent, we met them during the second season. Which led to us questioning why no one has the same hair and eyes as Geralt?

Who else has white hair and yellow eyes in The Witcher?

Geralt, being the hero of the story, made a really powerful first appearance when we met him back in 2019. Henry Cavill proved why he was born to play this role, as he made the perfect Geralt. Other than his bulky figure and distinguishable tone, there was something else that caught everyone’s attention; his white long hair and yellow eyes. Now, because Geralt was the only witcher we met during season 1 of the Netflix Original, we thought these features are common for all witchers. But that was not the case as we saw in The Witcher Season 2.

When Geralt took Ciri to his home, Kaer Morhen, we saw his little family of witchers. The handful lot of mutants were warm enough to be called a family, along with their father figure Vesemir. But contrary to our belief, none of the 12 witcher brothers of Geralt had hair and eyes like his. Eskel, Lambert, and Coen, the prominent witchers of the lot, all had different hair and eye colors. 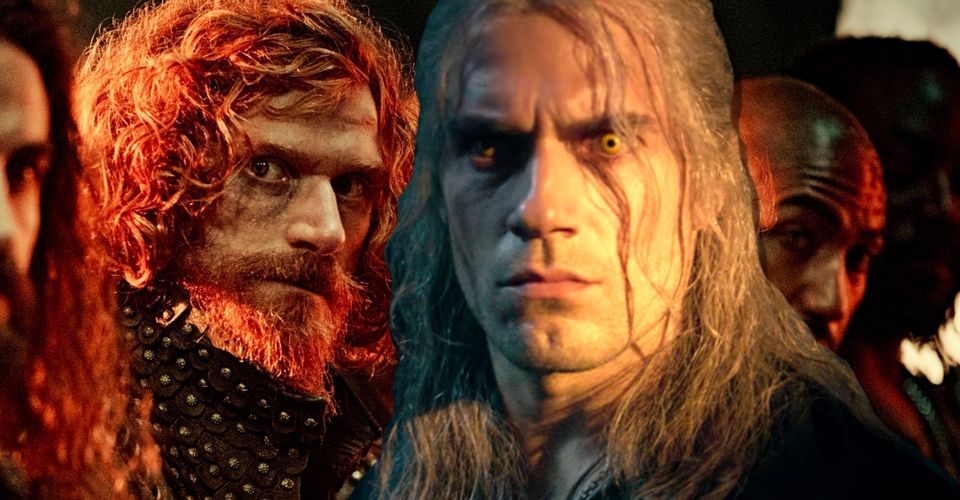 Coen dons a black bread and eyes of differing colors. His best friend Lambert is a brown-eyed redhead, and Eskel is a brunet with blue eyes. Not one of them has features that remotely look like Geralt’s. The closest to Geralt’s appearance is Vesemir. He has grey hair and golden eyes, which look a little like his students’. But his hair color results from his age, as he is believed to be over 300 years old. As we saw in the animated movie The Witcher: Nightmare of the Wolf, Vesemir had black hair, which proves that his grey hair has to do with his age.

Why does Geralt have white hair and yellow eyes?

All this makes us question why does the “Butcher of Blaviken” has such distinguished features. People widely believed that it is because of his age, but in reality, it has nothing to do with his age. We find the real reason for this when we look at his backstory. As we know, witchers apprentices start their training at a very young age and they go through a lot physically, magically, and psychologically. All this results in giving them enhanced abilities, which makes them the best hunters on The Continent.

The young witchers go through a chemical process called “Trial of the Grasses” which enables them to possess the abilities of a witcher. But the process is very terrifying and difficult; it causes so much pain that only 3 out of 10 subjects survive in the end. Geralt not only survived this trial, but he is the only child who got to access the further experiments which granted him extra abilities than other witchers.

Geralt’s white hair and yellow eyes are nothing but a side-effect of his extra mutations. That is the reason he is the only one who has these features, while there are other witchers kept their natural appearance. His white hair is also the reason Geralt is also called “The White Wolf.”

While we absolutely love the way Geralt looks in The Witcher, we also have to acknowledge the pain he went through while getting those features. However, all those enhanced abilities will come in handy when he faces greater foes in The Witcher Season 3.