You need to be brave when producing animation for adults, especially when catering to an audience that had prejudices against them for a better part of their life. The Japanese animation industry broke the stereotypes, and Netflix took the first step in this direction when it embraced the Anime culture. The second initiative was with Netflix’s hit anthology series Love Death + Robots, which injected the adult animation genre into the mainstream with its mature and extreme storytelling.

Dark humor, questionable situations, and unsettling plots: that’s what Love, Death + Robots has to offer to its audience. And the magnitude of all the elements heightened with the show’s third volume, especially the ‘Jibaro’ episode. So what’s the big deal about this particular episode? Let’s find out.

The third volume of Love, Death + Robots looked thrilling from the beginning, offering the audience a taste of what’s coming with its very second episode, ‘Bad Travelling’. Further, a more twisted approach with ‘Swarm’ and then gracing us with the presence of the great ancient one, Cthulhu, in ‘In Vaulted Hall Entombed’. However, the finale, ‘Jibaro’, branded itself into the viewer’s minds because of its fascinating concept. Most importantly, the 15-minute animated short film put on a spectacle with its exquisite visuals.

The realistic or rather ‘impressionistic’ animation, as Oscar-winning director Alberto Mielgo calls it, dazed viewers with its hyper-realistic offering. Mielgo returned to the show after volume 1’s ‘The Witness’. His 72-person team toiled for days to create the animated short: motion capturing and then using CGI to create the animated masterpiece.

What happened in ‘Jibaro’

Jibaro’s storyline revolves around a group of medieval knights, most probably from the renaissance movement, marching into a mountainous region of an enchanting forest when they stumble across a mysterious woman standing on a heart-shaped pond. 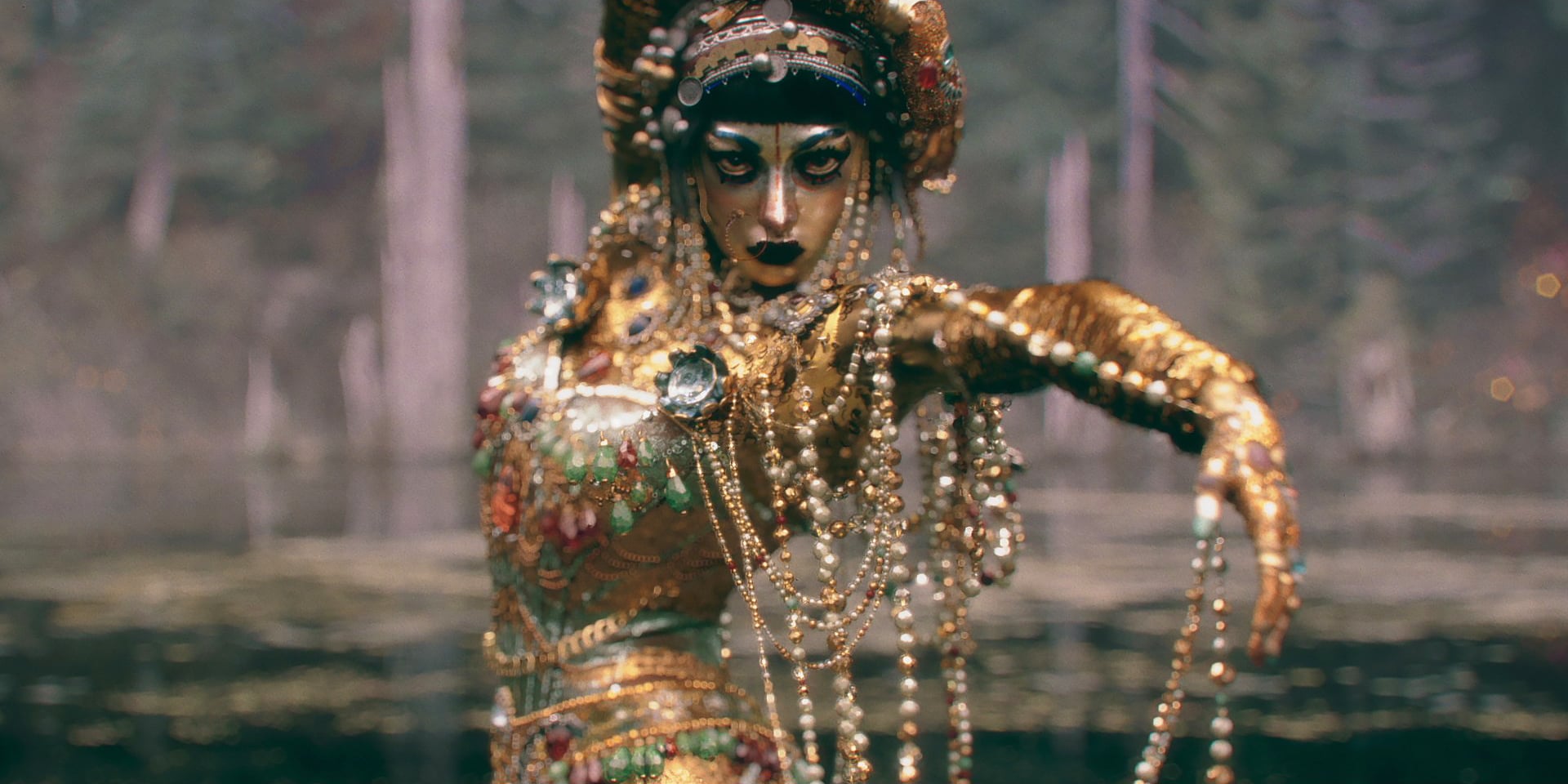 The leader of the knights, swathed in golden armor, swears something to the priests in the presence of several other knights. When suddenly, the mysterious figure, covered from head to toe in golden jewelry, starts dancing on the river. If that was not all, she begins her obnoxious screaming in a terrifying high-end pitch, like a siren.

Sirens derived from Greek mythology are creatures that lure people to their eventual deaths using their angelic voice or, in this case, screaming and dancing. This supernatural scream turns into a voice so powerful and the ballet dancing into movements so fluid that it even overwhelmed the rigid and tough knights.

ALSO READ: Netflix Confirms What We Already Know About Love, Death + Robot’s Jibaro, but Could Not Believe

The siren hereon referred to as the Golden Woman mesmerizes the knights that they do everything to get close to her, eventually drowning themselves in the bottom of the pond along with their horses. Even the priests couldn’t save themselves from the Golden Woman’s trance and started pushing each other, trampling their comrades just to get close to the divine figure in front of them.

However, there is one outlier amongst them, the deaf soldier Jibaro, who bit a golden plate earlier in the episode; the act that signaled the Golden Woman of the presence of the band of soldiers. Jibaro is helpless while watching his frenzied comrades succumb to their death.

Meanwhile, seeing a person whose actions she cannot control with her movements and voice astonishes the Golden Woman. She tries even harder to attract Jibaro and later questions her powers after being unable to do so. Jibaro then ventures into the forest, trying to find his way out. But the siren follows him in the dark of the night, almost in a childlike, innocent way.

The Golden Woman spends the night laying with Jibaro. When awake, Jibaro finds her beside him. After laying his eyes upon her and noticing the golden scales on her body, he follows her into the forest, ending atop a waterfall, where the Golden Woman invites him for a kiss. The Golden Woman is hit senseless, stripped off all her jewelry, and dumped into the waterfall by Jibaro, who is now solely driven by his greed.

ALSO READ: All the Original Stories on Which ‘Love, Death + Robots’ Volume 3 Episodes Are Based

The enchanted forest reacts to the Golden Woman’s death, turning the water body blood red. Jibaro, tired of carrying the burden of his greed, drinks the blood-infested water he threw the Golden Woman into.

Jibaro sees the stripped-down Siren, picked to shreds, now revived with tattered skin. She unleashes the voice on her abuser and shrieks once again as if expressing the pain of her violation. The Siren manipulates Jibaro, now paying for his crime, unable to do anything, and finally listening to what nature and life had to offer. The ruined knight falls into the river’s bed, adding one more body to the hundreds she had collected over the years.

One can sum up ‘Jibaro’ as a narration of greed and toxic wealth, finally termed an aesthetic tragedy.

But, director Mielgo had something else to add to it as well.

Jibaro, in Puerto Rican terms, means the people of the mountains. This story is an ode to the heartbreaking and sorrowful relationship between the colonizers and the natives.

The Spanish conquistadors that the knights in ‘Jibaro’ represent were colonizers who raided the forests of the natives, stripping them of their land and wealth. The natives fall prey to the differences in the foreigners and innocently accustom them amongst themselves, only to be abused and violated later. However, they do eventually fight back.

Director Mielgo also says that ‘Jibaro’ represents toxic relationships where people selfishly get together to fulfill their needs and then leave when done. Viewers cannot distinguish between the right and the wrong in ‘Jibaro’ as the Golden Woman initially wanted to kill Jibaro, and greed drove him to get together with the Siren.

The fourth volume of Netflix’s Love Death + Robots is rumored to be released in May 2023. Although Mielgo’s return to the series is not confirmed, the director has himself stated that he is looking to create a feature film, “I want to extend this to 80 or 90 minutes”, Mielgo shared in an interview with Awards Daily.

Did you like ‘Jibaro’ or was it ‘Bad Travelling’ that took the cake for you? Let us know in the comments below.

Contributed by Aashish Kumar from EssentiallySports

One thought on “What’s So Special About Netflix’s ‘Love, Death + Robots’ Volume 3 Finale ‘Jibaro’, Nominated For the Emmys?”