What is one thing that sets shows like Breaking Bad and Better Call Saul apart from any other drama series? Sure, they are quite extensive and often require a long time for the viewers to invest in them. However, they always reward the viewers by creating intricate storylines. These are so detailed that one may find new stuff every time they re-watch the show. Set in the same universe as Breaking Bad, Better Call Saul recently finished up season 5 and will soon be here with the sixth season.

The prequel series to Breaking Bad, this drama series follows Saul Goodman/Jimmy McGill (Bob Odenkirk). The lawyer treats morality as a spectrum, and experiments with its various colors of it. And even though the series is set to arrive with its sixth season in April, fans even today find details that date take us back to Breaking Bad. Recently, a detail surfaced that connected Better Call Saul Season 5 to Breaking Bad. Wondering what exactly it is? Here is everything you need to know.

Just like Breaking Bad, its prequel is indeed is a show with finer details. A lot of thought goes into everything that gets on screen. Recently, co-creator Peter Gould revealed that his fellow co-creator Vince Gilligan uses colors to hint at various things on the show. And particularly uses the color red to denote criminals. These little details really make the experience of watching the show exciting and thus, encourage fans to pay attention to the details. 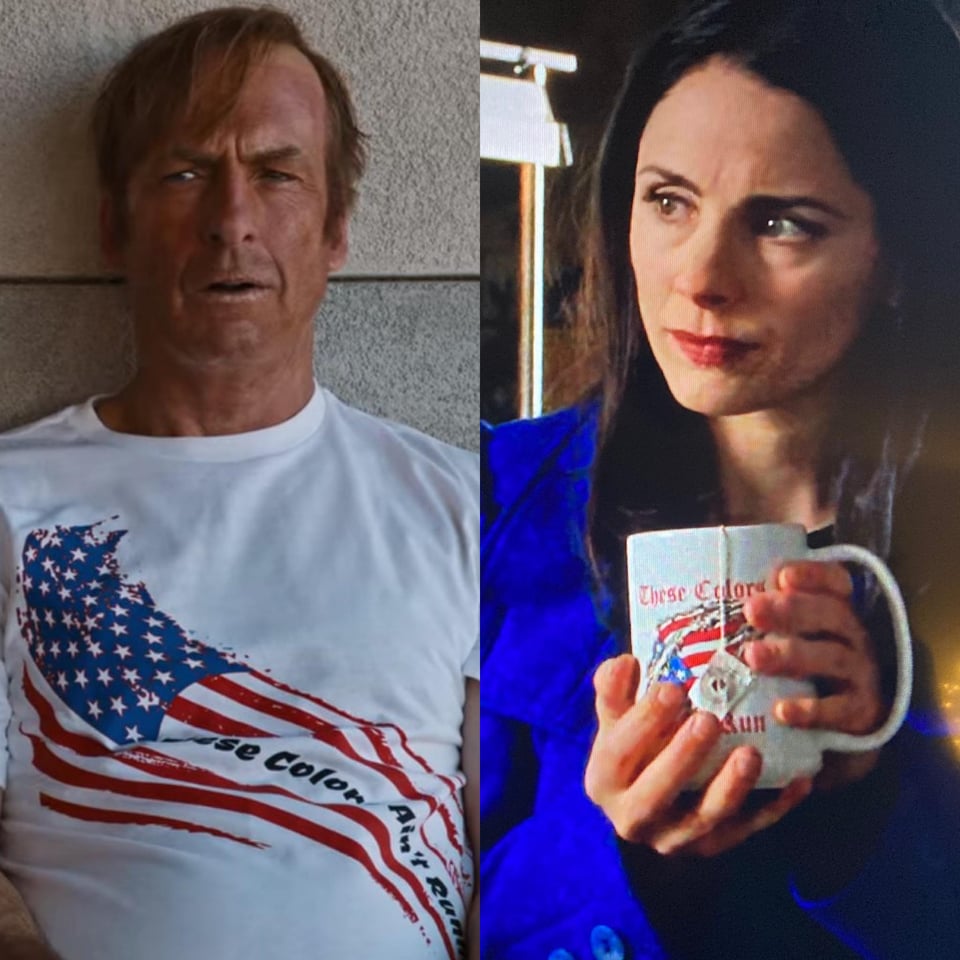 A Redditor recently pointed out a key detail that connects Better Call Saul Season 5 to Breaking Bad Season 5, and it is truly intriguing. According to u/SpiritualGangstaGir, the shows established a really minor but important detail. The Redditor posted a photo of Saul and Lydia Rodarte-Quayle (Laura Fraser) where the former is wearing a rather patriotic t-shirt and the latter is holding a cup with the same logo.

What does this logo mean?

On the left we see Saul wearing a cheap-looking t-shirt, featuring the American flag along with the words, “These Colors Don’t Run“. This is during the second last episode of Better Call Saul Season 5. While on the right, we clearly see Lydia holding a coffee mug that has the same quote and logo. This still is from the 13th episode of Breaking Bad Season 5.

It is worth noting that these references cannot be some coincidence. Because this was a period where patriotic feelings were at their highest, and Breaking Bad is set just after the events of 9/11. And given that Saul has to maintain his public image as a lawyer, it makes sense that he would wear something like this.

ALSO READ: Bob Odenkirk Opens up About His Medical Emergency on the Set of Better Call Saul While Also Teasing Season 6

What do you think about this detail? Let us know in the comments below.