Sadie Sink isn’t just another actress, she has become the style statement of youth. Anywhere you spot her while going to watch a movie with friends or be it at the Venice Film Festival, this girl has stunned everybody with her looks. That’s right! Sadie recently appeared at the 79th Venice Film Festival to attend the film premiere of her upcoming film, The Whale. The Stranger Things actress attended the movie premiere of Darren Aronofsky’s forthcoming thriller in which she also appears with Brendan Fraser, Hong Chau, and Samantha Morton for the first time.

Sink donned a dramatic bespoke Alexander McQueen gown as she made her way to the movie’s global premiere and the Filming Italy Best Movie Achievement Award celebration on Sunday night.

ALSO READ: “I was always blown away”: ‘The Whale’ Director Darren Aronofsky Sings Songs of Praise as Sadie Sink Leaves Everyone on Set Baffled by Her Skills

Sadie Sink aka the Queen of hearts

Sadie slayed the show with her dress which was in “sync” with her look. The dress included a strapless bodice with two side cutouts, sheer paneling, and shimmering floral crystal and bead embroidery, as well as a tiered lavender tulle skirt. Sink’s outfit was completed by stylist Molly Dickson with shimmering rings. 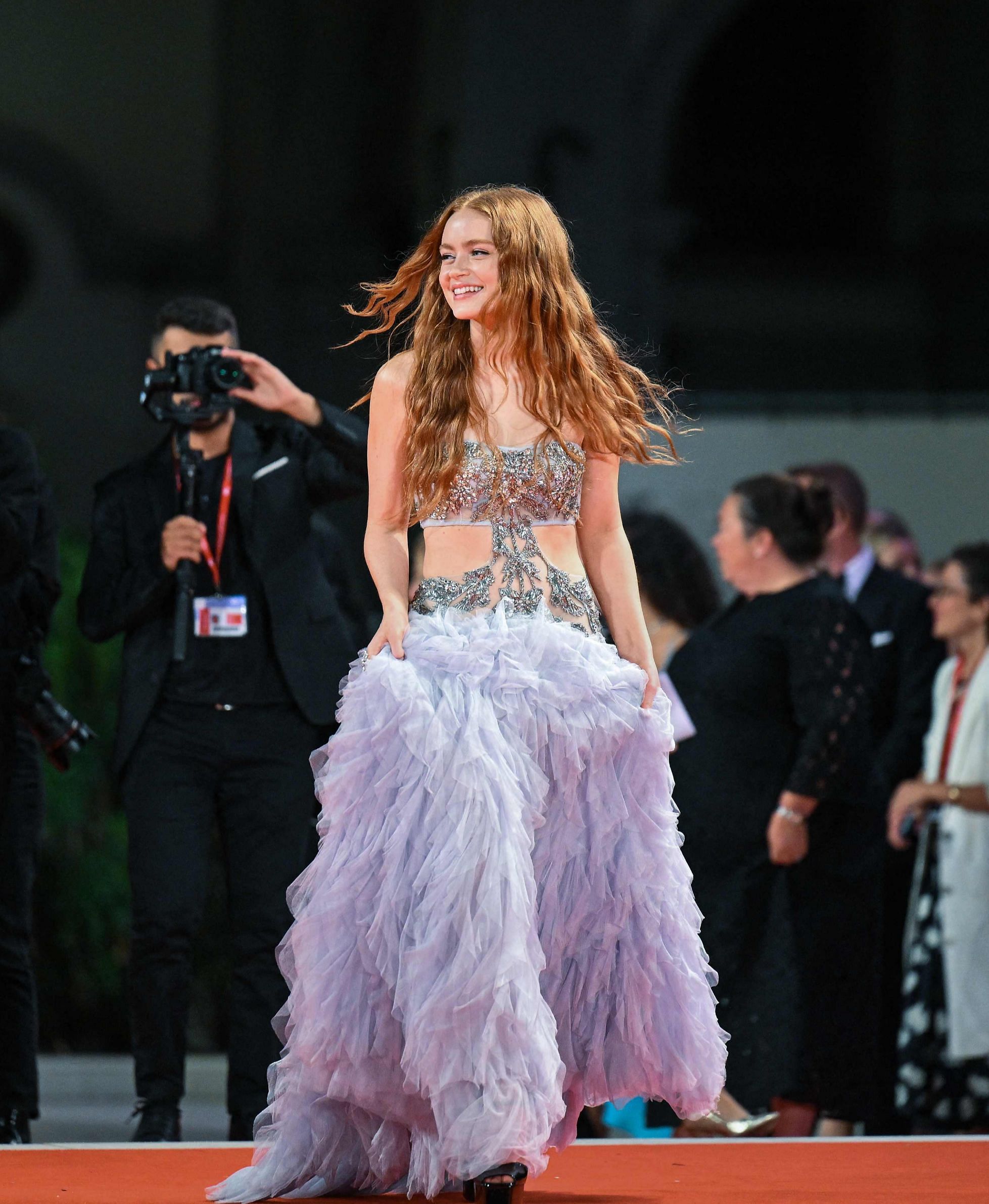 Shiny platform heels finished out Sink’s eye-catching outfit. The actress looked to like platform heels, thick toe straps, and black patent leather uppers. The shoes weren’t completely visible, but it’s probable that they had ankle straps and heels that were at least 4-5 inches tall to provide them more height and security.

Fans from all over the world are in awe of the actress after her recent appearance. One of the fans tweeted a clip of Sadie’s yesterday’s look saying that “the world revolves around Sadie Sink”.

it is sadie sink supremacy we just live it pic.twitter.com/5EZ4dt9qsr

SADIE SINK GOT THE POWER. pic.twitter.com/zzupm70TMd

sadie sink is a goddess. pic.twitter.com/8sA6e6NYjd

sadie sink is the it girl of the moment. pic.twitter.com/qaEzxUpjYU

The film also stars Brendan Fraser, who’s been receiving lots of appreciation from critics for his performance in the film. And, so is Sadie. The Whale will have its US theatrical debut on December 9, 2022. Well, fans are eager to see what Sink, 20, will do after the debut of The Whale, which opens a new chapter in her career. Let us know in the comments if you are excited too and how you like Sadie’s look.

Until the film comes, you can watch her on Netflix’s Stranger Things.