Netflix is all set to release Cyberpunk: Edgerunners. Recently, Netflix Anime released a new video where the creators of the same talk about the anime in detail. We see in detail what challenges they faced and how TRIGGER & CDPR Studios worked hand in hand to make a masterpiece based on a game.

What do the creators say about the characters?

In the interview, Masahiko, Co-Founder of Studio Trigger, talks deeply about the characters and theme. He says, “The character of David is filled with frustration and discontent”. Further, he explains how in the world of Cyberpunk, corpos (corporate) are the people of power.

The anime is much like real life, where social inequality is clearly seen. There is a disparity between gangs, the people who are at the bottom of the social spectrum, and corpos. He later explains how, even in a society like this, violence is prevalent. In the anime, when there is violence, status or wealth does not matter. Major theme is, of course, injustice and violence. The characters become so involved with each other that the story gets very interesting. The same themes were seen in the game.

How the creators designed Night City

Later in the video, Hiroyuki Imaishi, the Animation Director, discusses how the famous Night City was created. “Our goal was to recreate the same visuals as an anime,” he says. He further explains how the creators of the movie asked CDPR for a file where they can roam free around the city. The developers went in and took pictures of all parts of the city. They used those screenshots to create the background art and design. If you have played the game, there will be scenes that you recognize.

Yoh Yoshinari (character designer) also give us a few insights on designing David and Lucy. He compares how Lucy’s character was more difficult to create than David’s, and their main goal was to create a flexible design. David is from the bottom of the social stratosphere; he is filled with frustration and discontent. “I feel like that is something many of us can relate to on some level,” adds Yoshinari, and so the character was designed accordingly. For Lucy’s character, they wanted to make her look tough but also cute (kawaii). According to the designer, the goal behind this was that they wanted a character that anime fans would love to watch.

How did TRIGGER and CDPR work together to create Cyberpunk: Edgerunners?

In the video, Satoru Homma, CDPR Producer, talks about the challenges both companies faced. “There were a lot of challenges,” he said. Since it was a game before, it was important to make the anime look that way. However, Homma feels that these challenges were also the key to success. 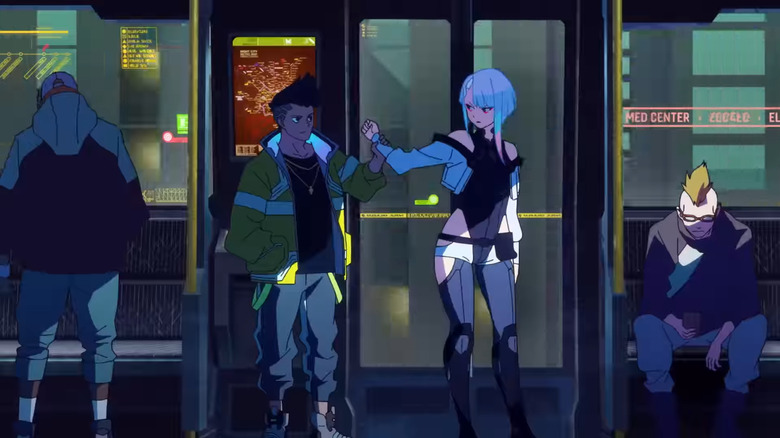 Both companies have amazing artists who are always eager to learn and give feedback, and that is something the producer goes into detail about. The main challenge, according to him, was to combine the game and movie. The goal was always to make sure the feedback was always more video game oriented than animation. The companies focused a lot on the graphics, and they are excited to see the results.

Are you excited to watch Netflix’s Cyberpunk: Edgerunners? Let us know in the comments below.