Prince Harry and Meghan Markle’s wedding was one for the ages. The grand ceremony saw a plethora of celebrities, royals, and notable personalities walking at St George’s Chapel in Windsor Castle on May 19, 2018. Keeping aside all the pomp and show, the wedding was marred with controversies as well. In this article, we are not discussing anything regarding the star couple, Harry and Meghan. Instead, we are reflecting on the controversy created by the reality television personality Chloe Madeley.

The daughter of two famous TV presenters, Richard Madeley and Judy Finnigan graced the royal wedding, along with her husband James Haskell. Madeley captured all the attention at the ceremony in a negative manner due to her outfit. The fitness expert was not dressed appropriately according to several people and was subjected to a lot of criticism and hate. Four years after the event, Chloe Madeley reflected on the day.

Chloe Madeley triggered the monarchists with her low-cut gown

Chloe Madeley disregarded the church protocol during Prince Harry and Meghan Markle’s wedding by wearing a low-cut and bare-shoulder dress. Though the television personality looked stunning in the cleavage-baring beige gown, she managed to upset the public. A lot of people thought that she had offended the House of the Lord. 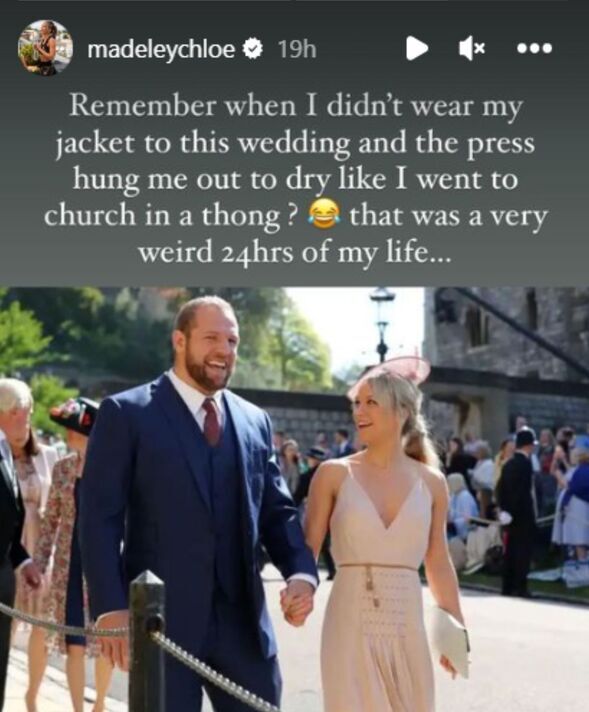 Madeley revisited one of the most scandalous days of her life recently on Instagram. Posting her picture from the wedding alongside her husband Haskell, the personal trainer wrote, “Remember when I didn’t wear my jacket to this wedding and the press hung me out to dry like I went to church in a thong? That was a very weird 24 hours in my life.”

This is not the first time that Madeley has spoken about the hate she received for her dress during the ceremony. In 2018, she justified her attire while speaking to Lorraine Kelly on an ITV show. The Englishwoman revealed that she had paired her gown with a jacket, as she was well aware of the church protocols of covering the shoulders.

Did you like Chloe Madeley’s dress for Prince Harry and Meghan Markle’s wedding? Let us know in the comments below.