Ryan Reynolds and Bradley Cooper were caught in a New York minute. The two make up the list of the biggest stars in Hollywood, with both known for their comedic style while also swirling effortlessly in romantic flicks. The two have not been in a movie together yet, but it is not like they haven’t tried. 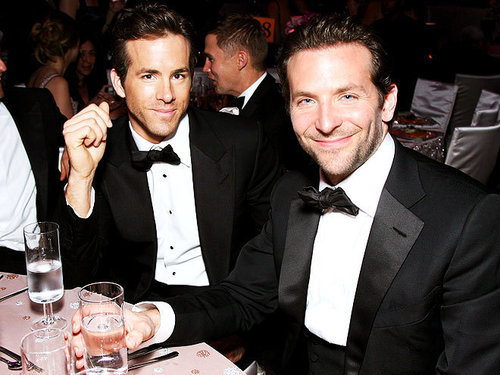 Meanwhile, stars were on the street this Halloween, conducting their daily chores. Dressed as their normal selves were, Cooper and Reynolds who were seen mingling together. But what were they up to?

Ryan Reynolds and Bradley Cooper were seen crossing paths in New York this spooky Halloween week. But it was not for a movie shoot. The actors were dropping off their kids at school. Cooper was in full dad mode, armed with a pink school bag and holding his daughter, Lea De Seine, while sporting a white boxing jacket, faded jeans, tortoise shades, and a slick debonair-style hairstyle. Meanwhile, Reynolds wore a sage buttoned-up full-sleeves jacket, paired with blue-gray jeans and faded yellow shoes.

Both the actors were clicked on the crowded city street, having a short chat and giving a hug before moving on with their duties. The American Sniper actor and Green Lantern actor have been clicked mingling during several events before. Back in 2010, the duo was planning on a cop buddy movie, though the plan remained unfulfilled. In fact, if Cooper had rocked his auditions, we would have seen him in Green Lantern instead of Ryan Reynolds.

ALSO READ: Blake Lively Once Revealed Her Childhood Crush and to Everyone’s Surprise He Has Interviewed Ryan Reynolds

As per a source, he was one of the first choices for the role, including Jared Leto. But to his luck, the DC movie tanked at the box office anyway. Not that Reynolds has much to complain about. After all, he met his now wife Blake Lively on the movie sets, who also starred opposite him in the movie.

At present, Reynolds is gearing up for the release of his musical Spirited on November 11, 2022, while preparing to return as Merc with a Mouth with Deadpool 3. Meanwhile, Cooper is making headlines with speculations of him dating his ex Irina Shayk again since they appeared at multiple occasions together.

What did you think about the two actors randomly running into each other? Comment below.