The brand-new album of Taylor Swift, Midnights has once again revolutionized the history of pop culture, uniting the entire world to hum the melodies of her tenth studio album. However, her seemingly neoteric fandom is not something recent. The 32-year-old artist has amassed a cult-classic fan following over a career span of almost 20 years. Not only the general populace but celebrities like Arnold Schwarzenegger are also ardent followers of the pop singer. 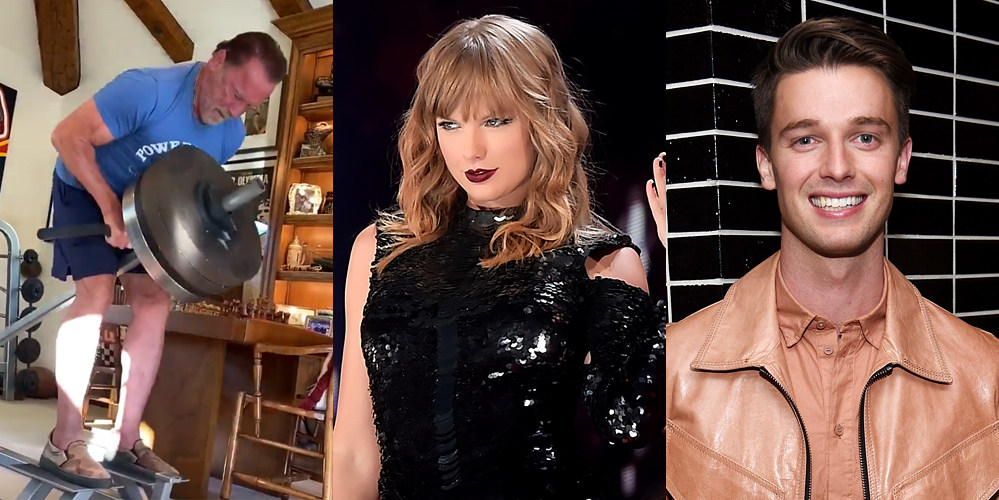 Apparently, back in 2020, the 75-year-old Austrian-American actor posted a small clip of him while he was working out. While his working-out sessions are nothing new to the world, what was interesting was his choice of this particular song in his workout playlist. And since Swift released her ‘mystifying’ collection of songs recently, it is a perfect opportunity to reminisce on this giggle fest.

As one can see in the tweet below, the seven-time Mr. Olympia title winner had absolute fun working out session whilst vibing on Swift’s Ready For It Track. In the caption, the Terminator star claimed his love for the T-bar exercise, which he believes is old but not obsolete. On a more hilarious note, his son, Patrick Schwarzenegger, re-shared the tweet quoting, “Going crazy in the gym to Taylor Swift. Love It. Keep it up,” as soon as the former bodybuilder’s post went live.

Old, but no obsolete. T-bar rows are one of my favorite exercises. Here’s some Monday motivation! pic.twitter.com/iBE2SVBhLt

Not only his son, but fans too had a fun time listening to Taylor Swift playing in the background.

Arnold Schwarzenegger pumping iron to @taylorswift13 is the content I’m here for.

No one is going to mention the T-swift? pic.twitter.com/vZsTw5xTqs

It seems like his followers certainly cannot believe it is Taylor Swift playing in the background!

Is that Taylor swift playing in the background? 😂

People believe him to be an absolute legend for sharing a love that is not only intergenerational but popular among Gen-Z kids.

👍💪 Old, but no obsolete is right. I also love @taylorswift13 is playing in the background 😂👍

Well, Jamming on Taylor Swift and getting some pumps on would undoubtedly go together!

ALSO READ: When Sadie Sink Revealed How She “couldn’t relate” to Taylor Swift’s Short Film ‘All Too Well‘

With her new album released, the songwriter and composer has taken the internet under her grasp, proving how legendary her songs already are. Which of the Taylor Swift songs would you choose for your workout playlist? Do let us know in the comments below.