The entire world felt the loss of British Queen Elizabeth II. She took her leave of the world on September 8th, 2022. And when her final journey commenced from Buckingham Palace, the entire family gathered to mourn for her highness. Meghan Markle, along with Prince Harry, also joined the family to grieve for Queen’s loss. The royal family had a mourning procession as they walked after the coffin of the late monarch.

Notably, the Duke of Sussex, who joined the cavalcade, was seen sitting beside Britain’s Sophie, Countess of Wessex, in the car. This news perhaps came shocking to many, including his wife. Further, Meghan and Sophie, dressed in black outfits, sat patiently beside each other in the car. However, the situation got awkward for Duke’s wife when he agreed to walk along with his brother Charles and his children behind the Queen’s coffin.

According to sources, as soon as Meghan knew she had to share the ride with Sophie, she was “almost buckled.” Perhaps she was expecting to share the ride with the Dutch. However, after the Prince decided to walk along with his brother, Meghan had to go through what people might call a slight “moment.” There was complete silence in the car throughout the procession. 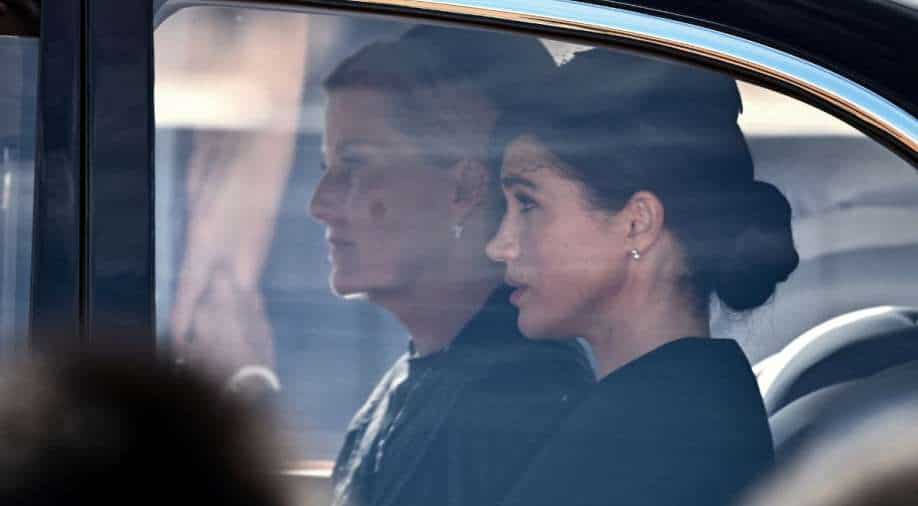 Apparently, back in 2021, the royal couple’s interview with Oprah Winfrey revealed the internal conflict that was going on in the family. Meghan and Harry had talked about the adversities and ill-treatment they, along with their newborn child, received. Later, Sophie made a direct jab at the popular host Winfrey in an interview. When queried about the interview in a British newspaper, she responded, “Oprah Who?” further asking, “Yes, what interview.”

ALSO READ: “There are some similarities”- Mariah Carey on How She Resonates With Meghan Markle’s Journey

Same sources also claim Sophie herself chose to share the ride with Markle to tackle the whole debacle with her head-on. Sophie was previously a PR for the royal family and shared a strong bond with the late Queen.

What are your thoughts about the whole situation? Do let us know in the comment section below.