An actor becomes popular through a breakthrough performance. But let’s not forget the journey that they have been through. After some minor roles, some just appearances, and so many rejections, an actor one day breaks through these situations and gets the recognition that he had been working for and deserves. We are talking about none other than Cobra Kai star Ralph Macchio, who has been on a remarkable journey on television. Let’s go through his journey.

Ralph Macchio and his 40 years in television

It is astonishing to see the number of years these actors have dedicated to their careers. Ralph Macchio is an American actor and producer, who is best known for his role as Daniel LaRusso in three Karate Kid films and in Cobra Kai, a sequel television show. From 1980 to the present, Ralph Macchio has been giving his everything to the television. He has played so many characters in various movies and theatre. Ralph has played and produced in various TV shows as well. Let us look at some of the significant contributions.

Eight Is Enough is an American comedy-drama series that aired on ABC. Ralph played Jeremy Andretti in the show. The show is about the life of syndicated newspaper columnist Tom Braden, who was a real-life parent. He had 8 children. Tom wrote a book of the same title as well.

This show was a booster for so many young actors, including Ralph. He would bag The Karate Kid after getting featured in the show.

It is an American comedy-drama TV series containing 8 seasons. Entourage relates to the acting career of Vincent Chase, a young A-list movie star, played by Adrian Grenier, and his childhood friends from Queens, NYC, as they attempt to further their promising careers in LA. It is roughly based on Wahlberg’s experiences as an up-and-coming film star.

ALSO READ: Ralph Macchio Found It Hard to Do This Scene of Cobra Kai Season 4 and It Was Dumped

Ralph, like many of the guest stars, appears as himself in the series. The series is about male friendships and family. It also portrays the Hollywood lifestyle as well. Entourage also has a movie now. Here’s the trailer:

Ugly Betty is one of the shows that attracted many fans. Macchio had a recurring role in the show as Archie Rodriguez. 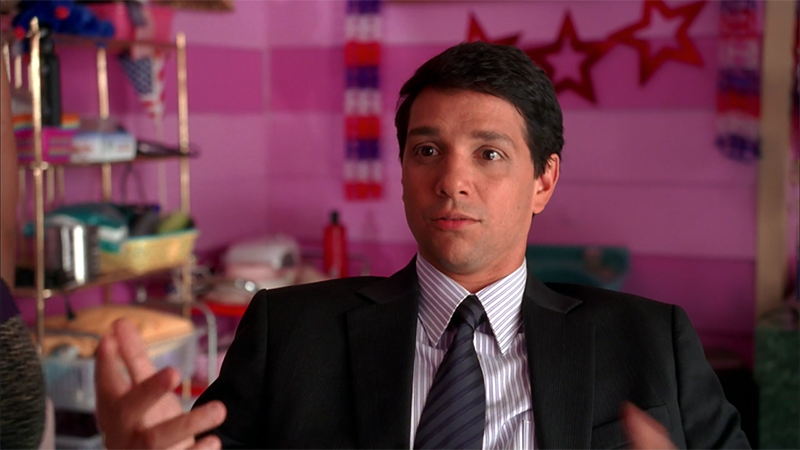 The American drama revolves around the character Betty Suarez, who lacks the style yet gets a job at a prestigious fashion magazine.

This is an American detective comedy-drama containing 8 seasons. Ralph appears in the 5th season in the 13th episode, “We’d Like to Thank the Academy”. He portrays the role of Nick Conforth as an instructor who may not be fit for the actual police work.

Again in 2014, he appeared on the show as Logan Phelps in the episode “Remake A.K.A. Cloudy… With a Chance of Improvement”.

How I Met Your Mother

One of the most loved and an all-time favorite of many, How I Met Your Mother, also featured Ralph Macchio in one episode of the 8th season.

In episode number 22, “The Bro Mitzvah”, Ralph appears as himself, representing the Karate Kid, which Barney doesn’t approve of. “I am nothing like Ralph Macchio,” Barney keeps on saying in the episode. This is the episode when Marshal and Ted have planned the bachelor’s party for Barney.

The show reveals the themes of government and police corruption, the violence of the drug epidemic, and the real-estate booms and busts that coincided with the change. Ralph has a recurring role in the show as Officer Haddix.

And of course, one of the extremely loved shows on Netflix, Cobra Kai. Ralph is the main character of the show, Daniel LaRusso.

The show is a continuation of The Karate Kid films. The plot of the show explores Daniel and Johnny’s inability to move forward and leave the past behind.

Share your favorite Ralph Macchio shows and characters with us.

Tracing the History and Lore of the Hahoetal Masks From Money Heist Korea, Do They Share Any Connection With the Infamous Salvador Dali Masks From the Spanish Show?