The Duffer brothers hit show, Stranger Things is still a hot topic of discussion. Days after its premiere, fans are still not over the events of the season. A newly made character tier list based on their capability to kill has caused much stir in the Reddit community.

The sci-fi show made a return to our screens this year after nearly a gap of more than 2 years. With much darker elements sprinkled into the show this season, it was worth the wait. The mega event even crashed Netflix’s servers and is now the biggest Netflix Original in the English-language TV show category.

Do you agree with this Willingness to Inflict violence on Stranger Things Characters’ tier list? 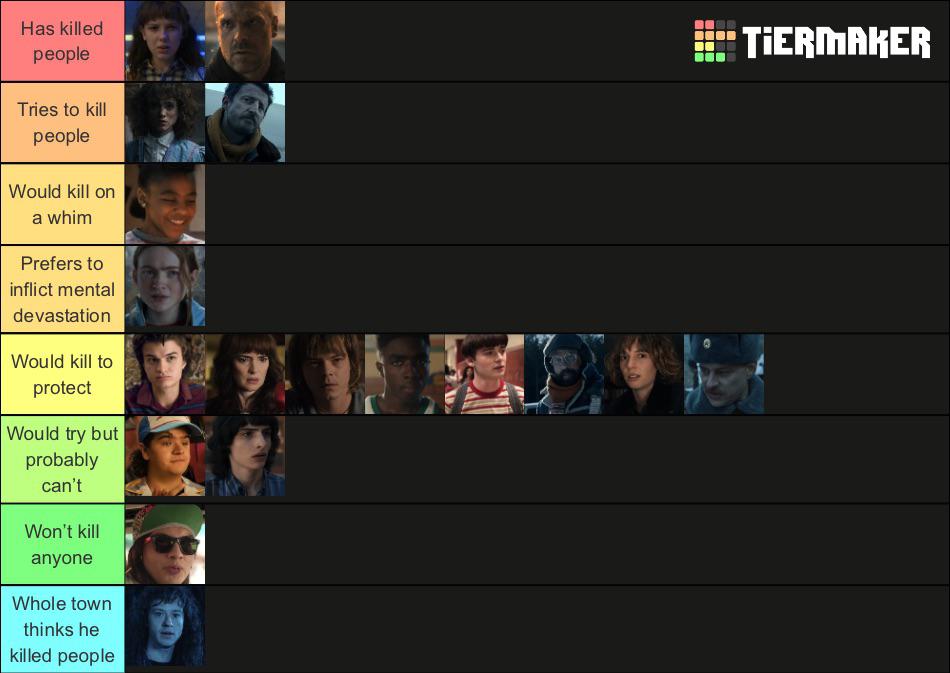 Hopper and Eleven being on top of the tier is no surprise. Both have resorted to violence more often than others. Hopper’s a sheriff, so it’s a part of his job. And our girl could only take so much when people constantly try to use her.

But shouldn’t Dmitri and Yuri share the same title as them? Dmitri, the USSR guard, was no goody two shoes and neither was the maniac Yuri. Yuri would double cross anyone at the drop of a hat.

Another disagrees with Erica’s placement and ties her with Max. Erica is smart enough not to kill on a whim. But she sure has shown us that she is quite the manipulator. She gets her way with Lucas every time and even Eddie at the Hellfire Club. Max is quite good at giving Lucas the cold shoulder too. And her iconic threat to Steve that she’d call the police on him. Both of them are capable of inflicting pain emotionally rather than physically.

ALSO READ: Neither Joyce And Hopper, Nor Mileven, But This Couple Was The Real Love Story Of ‘Stranger Things’ 4

Redditors disagree with Mike and Dustin’s placement too.

However, interestingly amidst the heated debate they all unanimously agreed with Eddie and Argyle’s placement on the list!

Netflix has renewed Stranger Things for a final season. They are still developing it and it will be another year or two before it arrives on our screens. So, all we can do right now is wait and enjoy more such fan content.